This was not unexpected after more than 3 straight months of weight loss. I was up 1.8 pounds on the scale this morning.

I’m still down nearly 34 pounds since January, but I’m still scrolling through the old food diary to figure out what might have led to this first reversal since I started. According to my records, I never went above 100 grams of carbohydrates over the past week, but that might have been bad logging on my part at one or two points – namely Friday, when I went ahead and had several squares of regular pizza for the first time in forever. I’ve had a piece here and there since I went low-carb, but not “several.” (But it was still a lot less than I used to eat in one sitting.) Also, I’m not limited in calories – just carbs – but I did go significantly over the MyFitnessPal app’s prescribed calorie limit (like, by 600+ calories) a couple of days. My snacking has also been a bit more frequent and fatty or high-carb (I really have to lay off the peanuts and pork rinds), and I haven’t logged as much water as I had been.

Perhaps just as significantly, I had a lot of nights of poor sleep, at one point logging barely 4 hours. Plus I logged one Pilates class, and maybe one day above 3,000 steps. I could get off my ass a little more (and my painful lower back and hips would likely be grateful).

I’m not too upset about this. It was inevitable. At least I have an idea of how to move forward: A bit more sleep, a bit more water, a bit more movement. Onward. 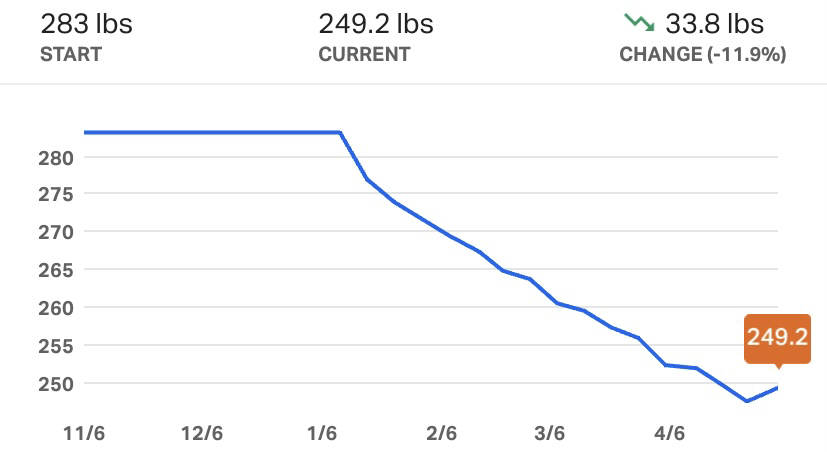