Few things lift my spirits like the first daffodils of the year — followed by the second, third, etc. 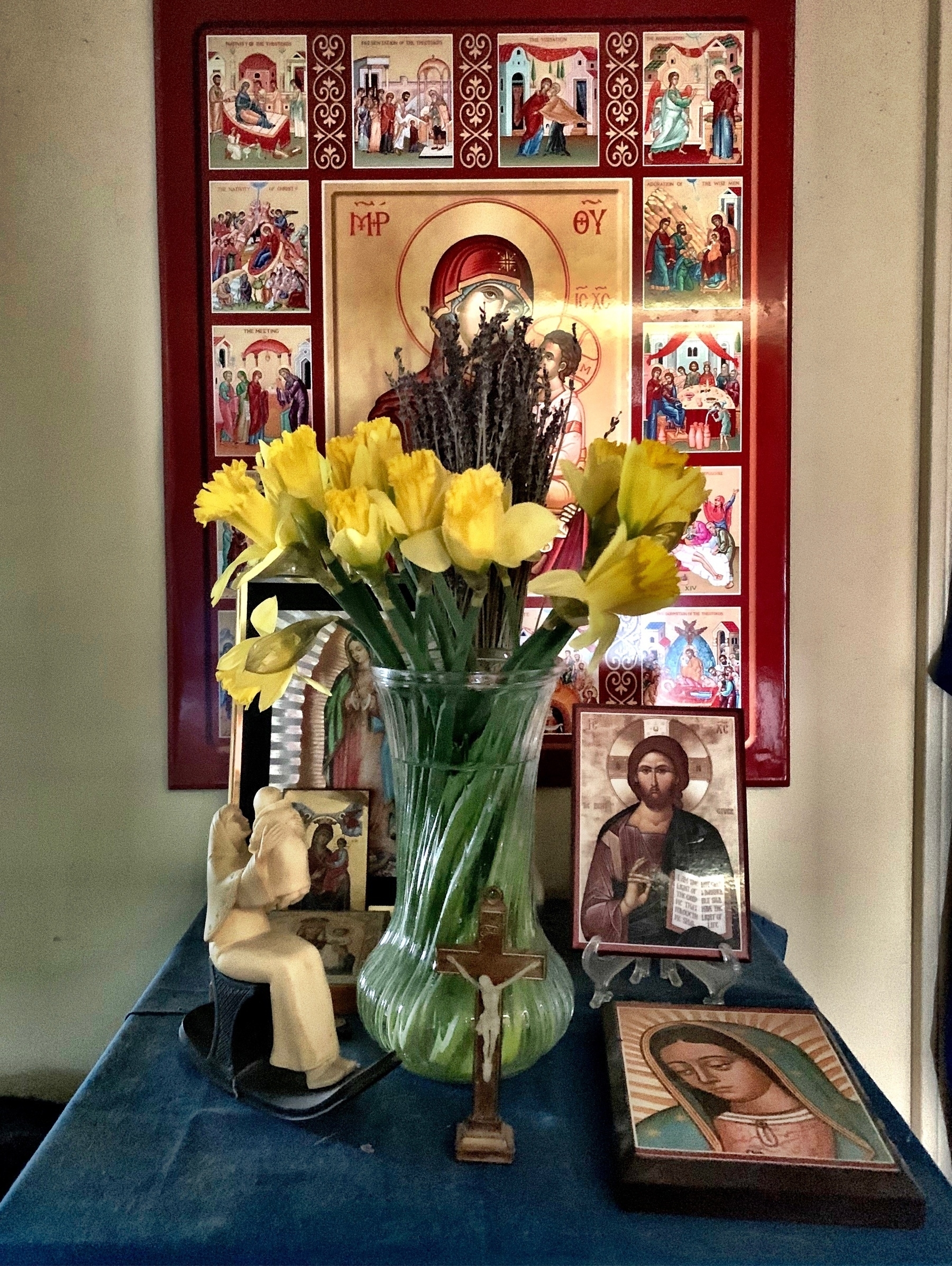 Went to a funeral for a 90yo Filipina American MD and mother of 6, including daughters Marianne, Marietta, Mary, and Marie. The priest said she spent more time in the adoration chapel than Jesus.

I really hope I get to write her hagiography one day. Until then, pray for Danda.

“The priest said she spent more time in the adoration chapel than Jesus.”

This tweet made me smile. And yes, let’s all pray for Danda.

Always go to the funeral.

As I searched in Google for a recent piece I liked that said as much, I found multiple articles to that effect.

This bit of wisdom aligns with the corporal work of mercy of burying the dead. Being at the funeral, regardless of whether you have perfect words of consolation (which you probably won’t), is simply the right thing to do. Sometimes, presence is the best gift you can offer.

Took most of the day off today so I could head to Libertyville for a funeral, with hopes for a detour to Marytown on the way home. It would have been my second funeral this year. But my paralyzing, perhaps irrational fear of ice-slicked roads on this blustery Midwestern winter day got the best of me. I already regret this.

I am grateful for my friend’s pre-emptive dispensation yesterday to pivot to the Zoom feed of the services for her dad. She is one of my dearest friends and one of the most gracious people I know, and I really wanted to be there for her.

Instead, I’m in my home office, viewing services 20 miles away and offering prayers for God’s mercy. For once, the Internet does not suck, and even with my regrets, I can only give thanks.

How is it that when I search for a Catholic book about self-esteem, the first book to show up is something titled “Ask Your Husband”? 😕

P.J. O’Rourke wrote about death in 2008, after he was diagnosed with a different kind of cancer than the one that apparently killed him this morning. The piece is at once surprisingly reverent and typically irreverent.

Death is so important that God visited death upon his own son, thereby helping us learn right from wrong well enough that we may escape death forever and live eternally in God’s grace. (Although this option is not usually open to reporters.) …

Thus, the next time I glimpse death … well, I’m not going over and introducing myself. I’m not giving the grim reaper fist daps. But I’ll remind myself to try, at least, to thank God for death. And then I’ll thank God, with all my heart, for whiskey.

I wish there was a card with this lovely prayer from Fr. James Martin’s book “Building a Bridge.” In lieu of that, posting this here. This remarkable exchange between Stephen Colbert and singer Dua Lipa about faith is making the social media rounds.

.@DUALIPA shows off her interview skills and asks Stephen about his faith and his comedy. #LSSC pic.twitter.com/h293PqyQOK

Of course, I’ve seen unpleasant comments on the old Twitter like “I cannot believe that anyone would think he is a Christian. Plus he says he is a Catholic and a Christian. You can’t be both.” 😐

And then there’s this, retweeted by no less than noted evangelical apologist and Presbyterian pastor Timothy Keller.

It just shows how intellectually superior Catholics are at articulating their faith. A Protestant would not have been able to do that. Anglicans could. Most evangelicals would say, “there’s no gospel in his answer.” #ReligiousStudies pic.twitter.com/2QyWD4rBXD

Having identified with all four groups in my lifetime (Catholic, Anglican, Protestant, and evangelical), I’d concur with Dr. Bradley on this.

(To clarify: I think non-Anglican Protestants and evangelicals are capable of articulating their faith. But, as Keller himself notes, “Catholicism is both a popular religion for the masses and yet has nurtured a robust intellectual class. Fundamentalism’s largely anti-intellectual stance has only grown among conservative Christians who are alarmed by the progressive excesses of today’s universities. However, this leaves conservative Protestantism in general with little ability to reach the college-educated and little ability to reflect theologically on our U.S. culture. The cultural ‘captivity’ of evangelicals—the inability to see the difference between biblical beliefs and American culture—is largely due to a lack of evangelical scholarship.")

And I disagree with Colbert on some things, but I love how open, winsome, and intelligent he is about his faith. Very grateful for his witness.

When I got this ring years ago, I didn’t realize it represented St. Brigid’s cross. I just wanted a simple cross, and this spoke to me. I’ve worn it almost nonstop since. 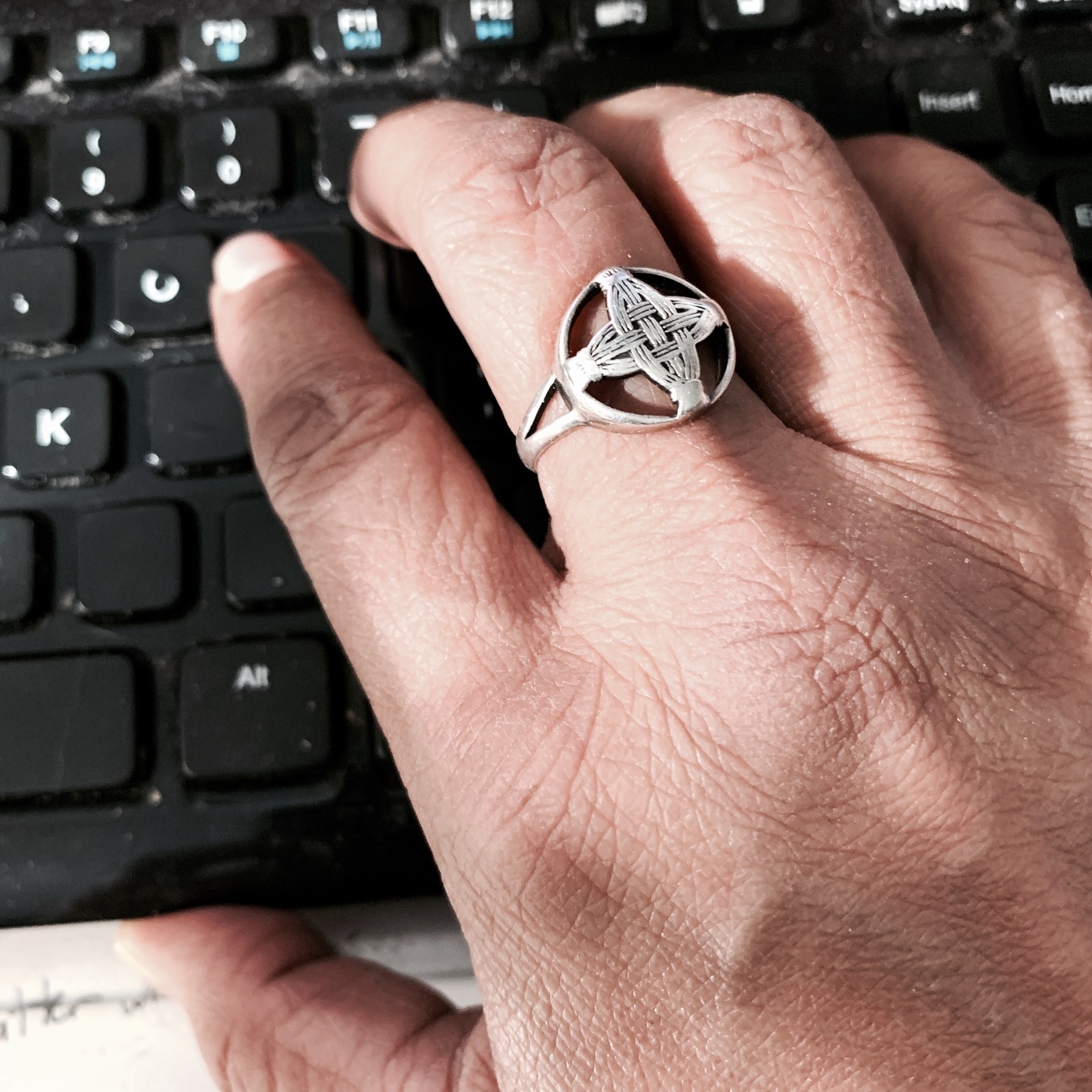 Fr. James Martin on how to respond when anti-vaxxers die of COVID:

“The problem is that even a mild case of schadenfreude is the opposite of a ‘Christian value.’ Jesus asked us to pray for our enemies, not celebrate their misfortunes. He wanted us to care for the sick, not laugh at them. When Jesus was crucified alongside two thieves, he says to one of them, according to Luke’s Gospel, not ‘That’s what you get,’ but ‘Today you will be with me in paradise.’ Schadenfreude is not a Christian value. It’s not even a loosely moral value. …

“Indulged in regularly, schadenfreude ends up warping the soul. It robs us of empathy for those with whom we disagree. It lessens our compassion. To use some language from both the Old and New Testaments, it ‘hardens’ our hearts. No matter how much I disagree with anti-vaxxers, I know that schadenfreude over their deaths is a dead end.”

Been struggling with the schadenfreude compulsion throughout this pandemic, especially with all the anti-vaxxer and anti-masker noise out there. So glad that Fr. Martin says something about it in today’s New York Times.

I sense a link to today’s epistle reading here.

F won a glow-in-the-dark rosary for correctly answering a quiz question at church today. She’s having a good day.

This op-ed in the Chicago Tribune speaks well for those of us who lament the loss of the Traditional Latin Mass in our archdiocese: “My concern with Cupich’s policy is that it punishes the sane majority of traditional Catholics for a minority who howl on the internet. My concern is that it mistakes an unreal commentariat for real, orthodox Catholics.”

In my agonizing over an extended family situation, my phone scrolling compulsion yields the fact that there is a patron saint of dysfunctional families: St. Eugene de Mazenod.

Don’t ever tell me God doesn’t speak to us through whatever means He pleases. St. Eugene, pray for us.

I know I’ve talked about having guiding words for my year. In the epistle reading during today’s TLM, I may have found a guiding verse:

Rejoice in your hope, be patient in tribulation, be constant in prayer. (Romans 12:12, RSV-CE)

I’ll be thinking about this one for a while.

And yet part of me wants to see “Sing 2” just to see how far Bono’s career has fallen.

Hard to decide who should bear the brunt of blame and wrath for this: the Indian legal system or the Church itself: “Indian Bishop Is Acquitted on Charges of Raping a Nun” (The New York Times). Lord, have mercy on us all.

The thick layers of ice surrounding our house (and only a half-cup of melting salt on hand) got me anxious about making it to Sunday Mass and CCD tomorrow. Just got email tonight officially canceling CCD.

Unclear as to whether the Chicago archdiocese COVID Sunday Mass dispensation is still active. (The archdiocesan website doesn’t make that clear.) But I’m taking a cue from this that we’re okay with Mass online tomorrow.

I’ll still bring it up in confession this week, though. Still feel weird about being online instead for Mass, but I’ll feel even weirder if we break a limb on our driveway or end up with our car slipping around the bridge off-ramp to church in the morning. 😐🥶

“He’s also not saying that people need to have as many children as possible, regardless of their ability to care for them. There was a time where he’s also said that Catholics don’t need to ‘breed like rabbits.'”

More in this transcript from the great podcast “Jesuitical,” which I highly recommend.

Having been a single, childless pet owner in a previous life, I get the indignant hot takes about the pope’s latest remarks. (And I never want to be That Guy who lords my married-with-kid status over others.)

Very grateful for online homilies that can make up for scary in-person ones – the kind that I worry will drive my kid away from the faith – at morning Mass.

Hope and resolve. The words popped into my head during Mass today.

The practice of picking words to guide a year usually entails one or three words. There might be another word popping up later, but “hope” and “resolve” are definitely keepers.

Attended a midday Latin Mass at our parish for today’s feast of the Immaculate Conception.

It was a particularly interesting experience after a vigil Mass the night before at another parish that is decidedly less, well, reverent than ours:

And for all of that, today’s Latin Mass – in the middle of the day, a somewhat more inconvenient time, really – had more than twice as many people attending, and our pastor distributed the Eucharist himself.

I really don’t want to be one of those stereotypically cranky and indignant TLM types. I’m fine with the so-called Novus Ordo liturgy in the vernacular, so long as it’s celebrated by clergy and parishioners in a reverent and respectful manner. This is rarely the case in the three parishes in our DuPage County suburb, which is one of the reasons why we are registered at a more orthodox parish down the road in a decidedly more working-class Cook County area.

But every time I attend Mass in our town, I’m immensely grateful for our parish, where the faith and the Real Presence is taken seriously. It’s been a gift.

Today’s amusing catechical moment: sitting behind the older CCD boys at Mass and, when the priest mentioned in passing that there would be no video games in Heaven, hearing their audible gasps.

Once I stopped constantly and loudly virtue signaling my faith on social media, my faith deepened. Funny how it’s worked that way.

It’s nice to come home reeking of incense from Mass again. Our parish only trots out the thurible for major feast days like today.

So now we’re heading out again smelling like roses (per the Feast of the Assumption). Cool.