A biologist provides a way to make your own yeast for baking. But I’m still trying to figure out how one might use this in a typical bread recipe. (It may say so somewhere, but I overlooked it.)

We were able to score some face masks this afternoon from our next-door neighbor, whose daughter-in-law has connections in Chinatown for such things.

This is such a weird world we live in now.

Dreamed last night that I wandered outside to go grocery shopping and found a giant stack of face masks on sale at Jewel. Happiest dream I’ve had in weeks.

It’s going to be a long pandemic.

“Before Covid-19, my continuing Pokémon Go habit was just a mild embarrassment. … Now the app is one more reminder of what we’ve lost — the casual ability to just go places and have real-world experiences, including the ones mediated by an augmented-reality game.”

“Think that burrito from Friday is still any good?”

“A cardiologist who was pulled over for speeding on a Minnesota interstate said she was deeply touched when the trooper gave her face masks instead of a ticket.”

“Mom, the dog is licking my foot!” #ThingsYouHearDuringElearningThatDontComeUpAtSchool

Quarantine loaf No. 4. (Didn’t clean off all the Dutch oven char from the previous loaf.) The concept of no-knead bread is a gift for lazy bakers like me. #coronabaking 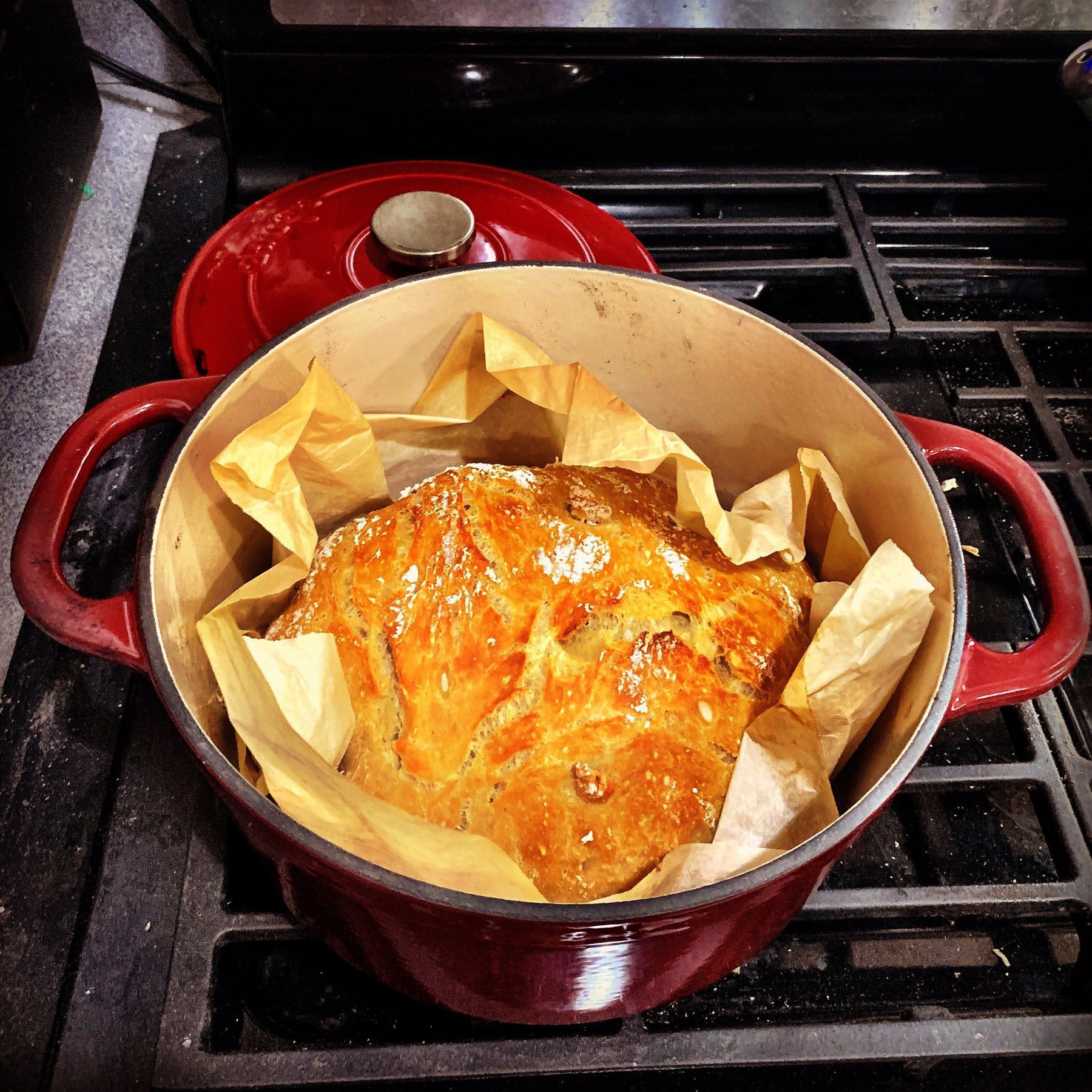 “In the midst of the worst domestic crisis in memory, Trump is acting like a petulant child. Governors, like smart adults, tell him no and then ignore him, depriving him of attention. … The press would be wise to do the same.”

Inspired by @agilelisa’s popovers post and tried our own. They were a bit well-done and didn’t “pop over,” but they were still tasty out of the oven when buttered. Not bad for a first try at these. “People are panic-buying chickens like they did toilet paper.”

This provided a much-needed laugh today: Sales of tops are up — but not pants. Blame the spike in videoconferencing.

First coronavirus sheltering in place, now strong storms and a tornado watch. I don’t have enough sugar and flour to stress-bake my way through this.

In this time of disconnection from the world, I’ve been taking inventory of my friendships over the years. Conclusion: I am a terrible friend.

Perhaps it’s a matter of having a lot of friends “for a season.” But in looking back, I have been lazy about maintaining ties with those who wanted to remain in touch. I’ve been blessed with friends who are diligent with things like birthday cards, Christmas cards, and email.

At one point or another, once it is clear that the gestures only flow in one direction – mine – the cards and emails stop.

Nowadays, this kind of thing is called “ghosting.” And I’ve been ghosting – that is, cutting off all communication with a friend or significant other and leaving that person wondering why – since before it became a thing.

My disappearance off the radar of others is usually unintentional on my part. I like the concept of snail mail and phone calls, but it’s easier to blog or post on social media before descending into my typical passive, inert state. Blame a critical mass of introversion, low energy, and laziness. My focus on my family probably exacerbates all that, but that critical mass existed long before I sprouted a kid.

On top of that, there’s anxiety. (I’m talking about pre-existing anxiety, not COVID-19 anxiety.) I used to love heading into the city to see friends. But the longer I lived in the suburbs, the less I wanted to travel outside my new comfort zone. Heading solo into the city unnerves me now; urban driving scares me, and then there’s the search for parking and concern about break-ins. Never mind that I lived there for 7 years; then again, in those years, I didn’t have a car, and I didn’t have to worry about parking or anything else related to driving.

This has happened with at least two or three friends. I’ve tried to make amends with one over the past week, but I’ve heard crickets; I’m not optimistic that I’ll hear back, and I would understand if I never heard from her again. (I’m still working on the others.)

(This behavior, I realize as I write this, probably extends to all the times I’ve traveled to California to see family and avoided telling friends who want to see me.)

The upshot: As a friend, I suck. And I’m sorry to the friends I have hurt by ducking their radar and damaging our friendship.

That said, I don’t apologize for my anxiety. My laziness, yes, but not my anxiety or low energy. It’s just that I could stand to find a better way to handle the latter without hurting those I care about.

Since the Pokemon Go event we planned to attend in St. Louis was postponed, the game’s creators allowed ticket holders to catch the same Pokemon planned for the event wherever we were in the world. So, we drove around on a rainy afternoon hunting Pokemon in today’s New Normal. 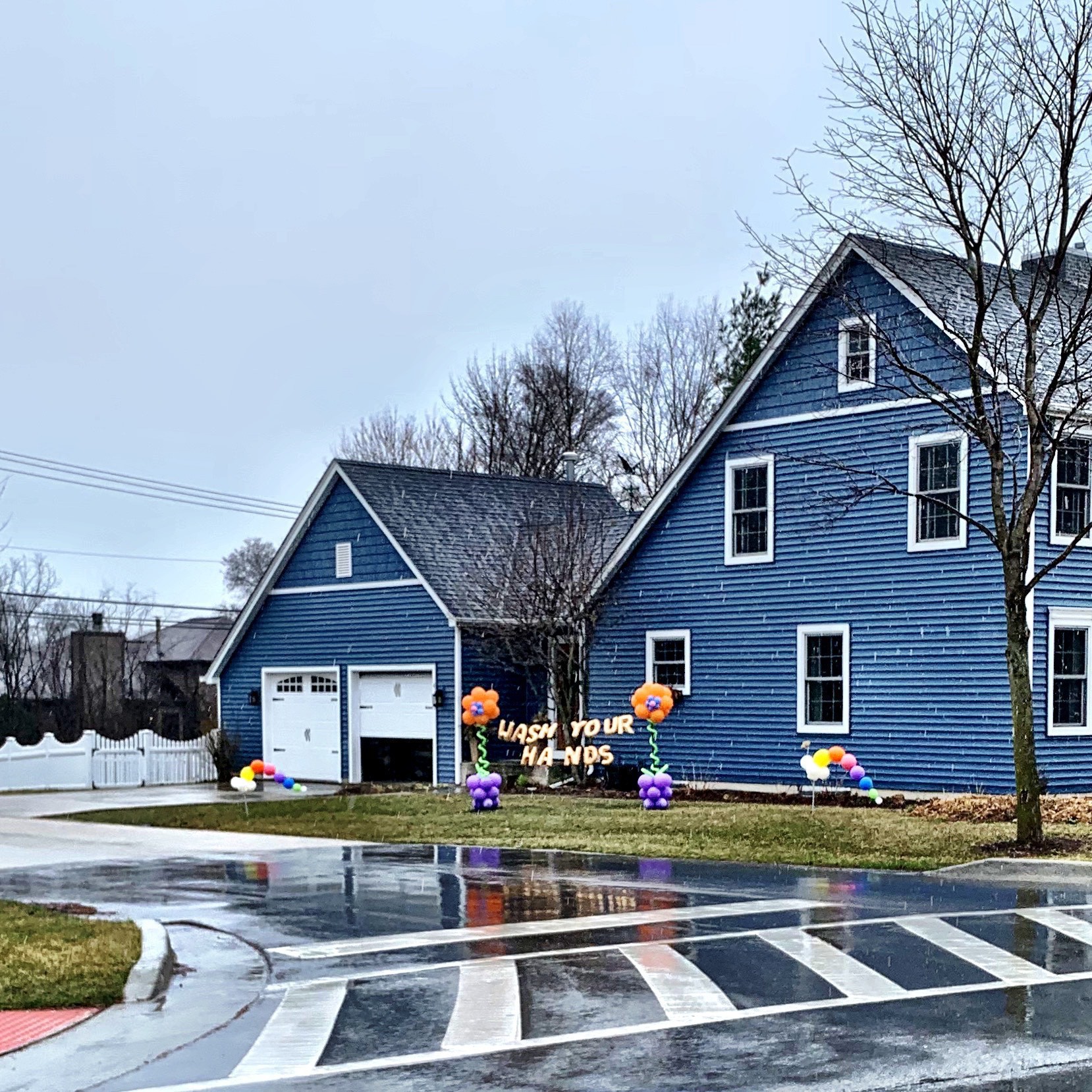 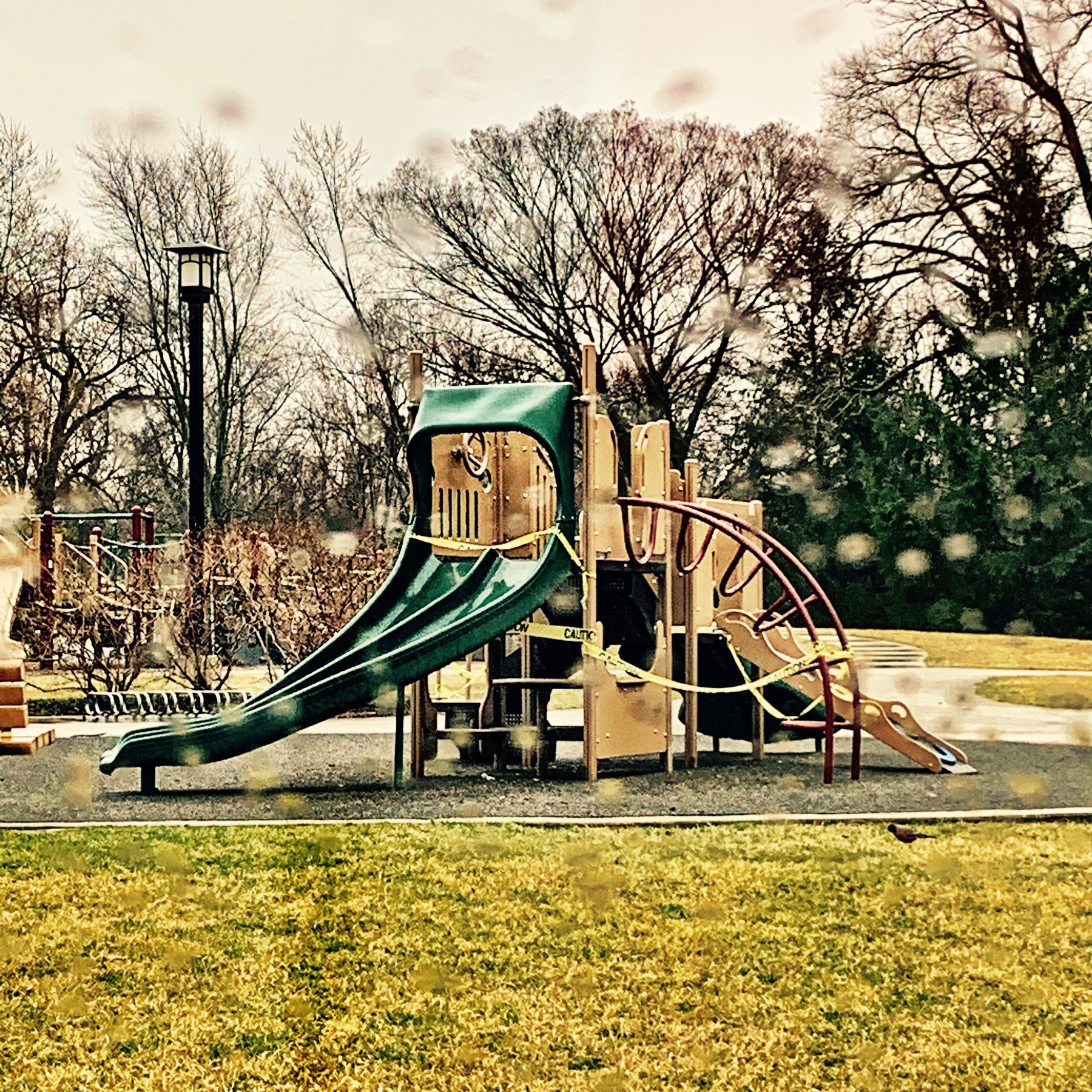 My colleague’s kids in Upstate New York are producing a weekly newspaper during their quarantine time. Frannie is their Illinois correspondent. Here she is interviewing her dog. 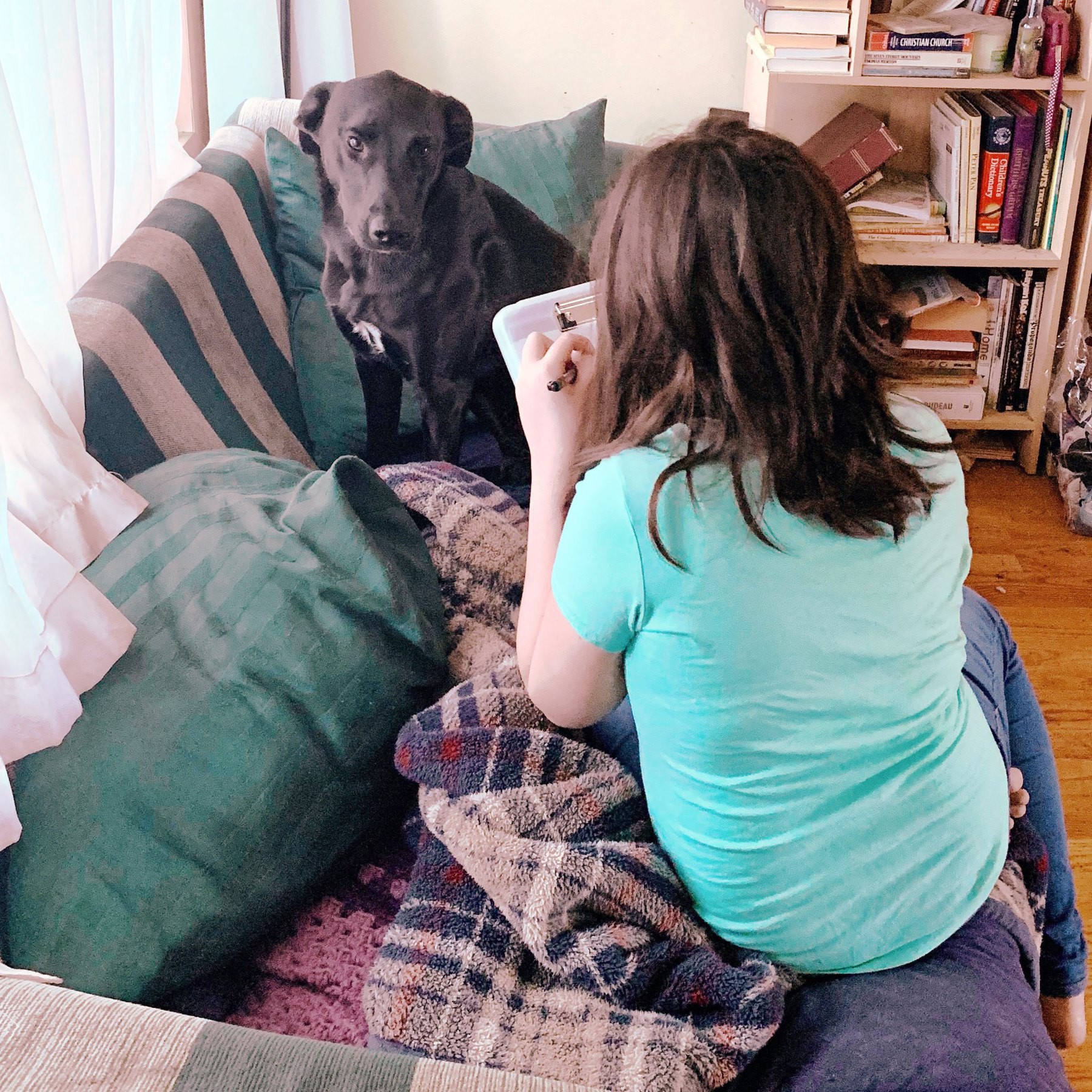 My kid’s middle school put out an Instagram video with virtual sticky notes from teachers and staff telling students what they miss about them and about school. F clearly enjoyed it when I showed it to her, even though she kept checking the length because it was taking a while.

There’s plenty to be anxious about these days. Am I going to catch this virus? Do I have it already, and have I passed it on to anybody? With the aides at my 89-year-old mother’s home allowing visitors this week (despite the California governor’s order not to allow such things at nursing homes), will my mother catch it? What about the rest of my family? And what if Trump still manages to get re-elected, no matter how incompetent he has been during this crisis?

Now I’m starting to see more people online telling us to “use your isolation time wisely,” “make the most of your time inside” and “make that idle time count.”

I know the whole idea of cultivating a “memento mori” mentality, as I was starting to do this Lent before it became coronavirus season, is to develop a sense of urgency in this life. We are to live fully aware that life is too short to waste time. Yes, I get that, perhaps more than ever with this pandemic bearing down on us all.

And yet being told to be productive when I’m so tensed up and paralyzed with fear just leaves me wracked with pressure and guilt. I mean, I’d really like to be productive and make the best of things. But can I have please some time to somehow relax and figure out how to manage this anxiety first?

Couldn’t get myself out of bed this morning. No fever or anything. Just stomach discomfort, fatigue, a headache, and body aches.

My midday off: Wrapping birthday gifts with Christmas paper because that’s all I could find around the house. Watching Game 4 of the 2005 World Series on YouTube. (#GoSox!) Pain free. NOT working from home.

I may have finally found a happy place for the first time in weeks.

It’s Tween Birthday Week here at the Shut-In House: McDonald’s hash browns for breakfast, scrambled eggs for lunch, time with her download of the new Animal Crossing game. Later: maybe a neighborhood walk, more gifts, pizza (us) and fries (her) from the neighborhood pizza joint, and cake with vanilla gelato.

Typically, we might have taken her to Dave & Buster’s for dinner tonight, perhaps with a couple of friends if they were in town for spring break. Obviously, that can’t happen right now. But it’s still a birthday, and we will still celebrate.

Nice to surface just long enough to get my kid a birthday cake and have the supermarket folks tell me to wish her a happy birthday.

Keeping the 3 days off I requested for F’s 12th birthday tomorrow and a trip to St. Louis and downstate, even though we canceled the trip. I don’t think I’ve had a truly relaxing, demand- and anxiety-free moment in the past few weeks. Fingers crossed that one will come up soon.