Went to bed after the Dodgers broke the tie at the top of the 15th. Turns out the Padres tied it at the bottom of the 15th, only to have L.A. take back the game for good in the next inning.

“In the end,” writes A.J. Cassavell at MLB.com, “the Padres were left to rue another crushing defeat, a flurry of missed opportunities, and a small handful of decisions that got them there.”

Between the failure to shore up pitching and poor managing, the Padres are in free-fall mode.

When baseball is a key mode of self-care, and your team (or, in my case, one of your teams) takes a terrible turn, it drags down the rest of your life with it. And when your life is also on a downhill slide, it makes for a particularly horrific time.

I didn’t need to end one day and start the next this way.

Padres-Nats game in gunshot delay. I’ve already seen one tweet complaining about how we can’t even watch a baseball game in “Biden’s America.”

Waiting for the first statement that this kind of thing wouldn’t happen if we only would arm the ball players.

It’s MLB All-Star Game Day. The player here, Brian Goodwin, isn’t in the ASG this year, but I love the joy in this image. I made several “baseball cards,” but I liked this one the most. 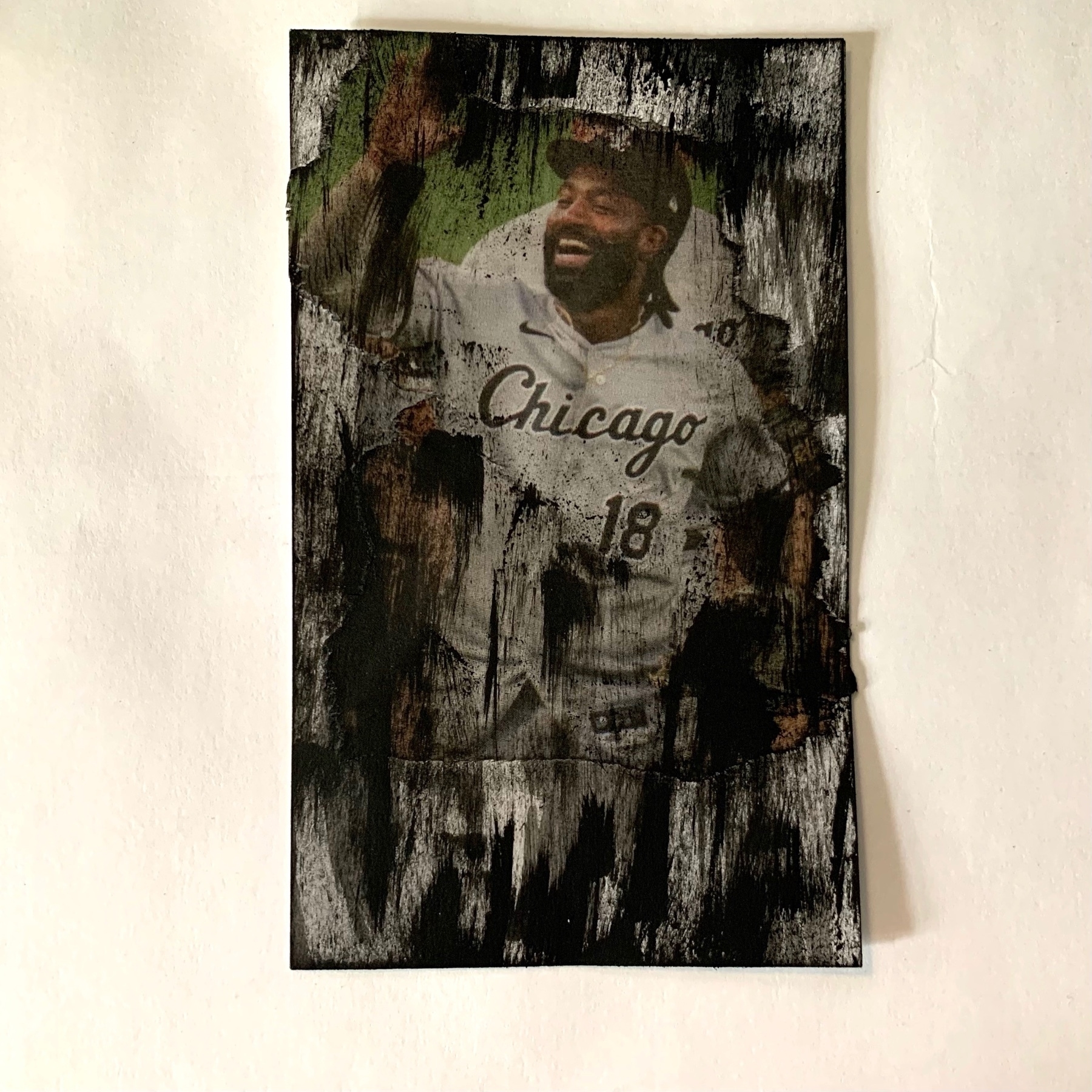 “Jake Cronenworth, Yu Darvish and Mark Melancon on Sunday were selected to the NL’s All-Star roster, joining [Fernando Tatis JR.] — voted last week to start the game — as the Padres will send their largest contingent of players to the Midsummer Classic since 1998.

“That was the last time a star-studded Padres team advanced to the World Series.”

Queasy and crampy today. Haven’t felt like this in months. Given the past week at work, it’s clearly stress-related. It’s gonna be rainy all day, so I’m inclined to spend this Saturday hunkered down while creating art, watching baseball, and maybe catching up on snail mail.

I’ve already made one planned tweak to the home office (elevated the monitor shelf), and I need to organize the office a bit more before starting my work week early late tomorrow night.

Spending my Saturday catching up on Padres games and making a flaccid effort to clean my home office.

We flew to California a week ago today; we returned home early Thursday morning. I ate half the breakfast burrito my sister insisted on bringing to me less than 24 hours before, then dragged myself to bed to sleep off some grief, anxiety, and the pain of long hours crammed in a winged sardine can with a thick piece of cloth over half your face.

Catching up on whatever news I can stomach (which, these days, isn’t much). The news item that was the biggest gut punch for me: the latest round of buyouts at the Tribune – the first under Alden Capital ownership.

There’s so many familiar names among these buyouts, I’m starting to realize that pretty soon, only a tiny handful of people I worked with nearly 20 years ago will be gone.

Among them: three columnists for whom I built websites when I landed at chicagotribune.com in the late 1990s, including Eric Zorn – who was especially kind and patient with me and will forever be in my mind the tallest, most interactive columnist ever.

Godspeed to the folks who are leaving. And God help the people who are left.

I still have a lot to process from the past week. Today I spent a great morning over breakfast doing a bit of processing with one of my dearest friends. Not sure how much processing I’ll do in this space, though. My greatest anxieties stemming from the week will likely remain analog and offline. I have enough to write about online.

The airline we flew provides free entertainment to distract us from the cramped seats, the aforementioned long hours in a winged sardine can, and the discomfort of lugging all of your possessions in a carry-on to avoid the $30-per-bag fee for checked-in luggage.

Somehow, “American Utopia” made me feel okay about growing old, even though the “Stop Making Sense” movie provided the soundtrack of my college years more than 30 years ago, and this latest concert film reminded me of that. Byrne has aged, like we all have, but that hasn’t kept him from making joyful, energetic, and insightful art. I watched “American Utopia” on the way to California and during my return home, and it buoyed my spirits when I needed it the most.

The flight only offered the first two episodes of “Ted Lasso,” and when I got home, I went ahead and subscribed to Apple TV+ so I could binge watch the final eight episodes. It didn’t take long. (I only binge watch archived baseball games on MLB.tv, so this was a first for me.) Much has been said about the power of niceness that the show depicts, and that’s part of what I adore about this show. But the titular character demonstrates more than that; there is a resilience and stubborness in Ted Lasso’s optimism, even in the midst of his own sadness and anxiety over his failling marriage. Some critics say, well, this is fiction and not real – but why must so many shows be hard and cynical? We get enough of that in real life.

I don’t watch much TV or many movies; the critically acclaimed stuff strikes me as cynical or overwrought or trying too hard to be woke or meaningful, and I’ve had my fill of that. (Much of what passes for news or punditry also feels overly earnest or a vehicle for cynicism, and I prefer to consume such content in small doses.) I’m just hoping “Ted Lasso” doesn’t take a dark turn in its second season, which starts next month.

I ate my weight in carbs while we were gone. I didn’t eat as much rice as I might have six months ago, but I thought nothing of all the tortilla-based and bready, sugary stuff that made its way into my grazing. I think I ended up maybe more than 100 grams over my 100-gram carb limit at one point. But I still logged everything.

Not alarmed. I decided weeks ago that I would go easy on myself this past week. I fully expect some weight gain when I weigh myself Monday. In the meantime, I’m back on the wagon and watching my carbs again. Onward.

It’s that time of year. I would have rather voted for Victor Caratini over Austin Nola for NL catcher, but oh well. Started my day weeping over Steve Stone’s dog dying and a sad cartoon about pets who “cross the Rainbow Bridge.” (I don’t feel like trying to discern whether that is theologically correct.) Then I discovered soon enough that returning to work today was a horrible idea. I forgot to eat and drink for much of the day.

And this apparent Cubs sweep of the Padres is just making this crummy day even crummier.

The Sox game brought me some joy today. But I’m kind of crashing right now, emotionally and physically. Time to lay low — maybe here, definitely on social media — for a bit. Very grateful tomorrow is a holiday.

Another day, another ballgame. I finally got to wear my A.J. Pierzynski jersey to a Sox game. But Mom’s namesake player went 0-for-4 today. And I saw a Titan’s son (Tyler Nevin, son of Phil) go 0-for-3 with the Orioles.

The good guys won, as Hawk Harrelson would say. And the fact that the Padres lost – just as they did Thursday – makes me worry that maybe my attending ballgames jinxes my hometown team.

It was still a beautiful day for baseball. And there was joy today. 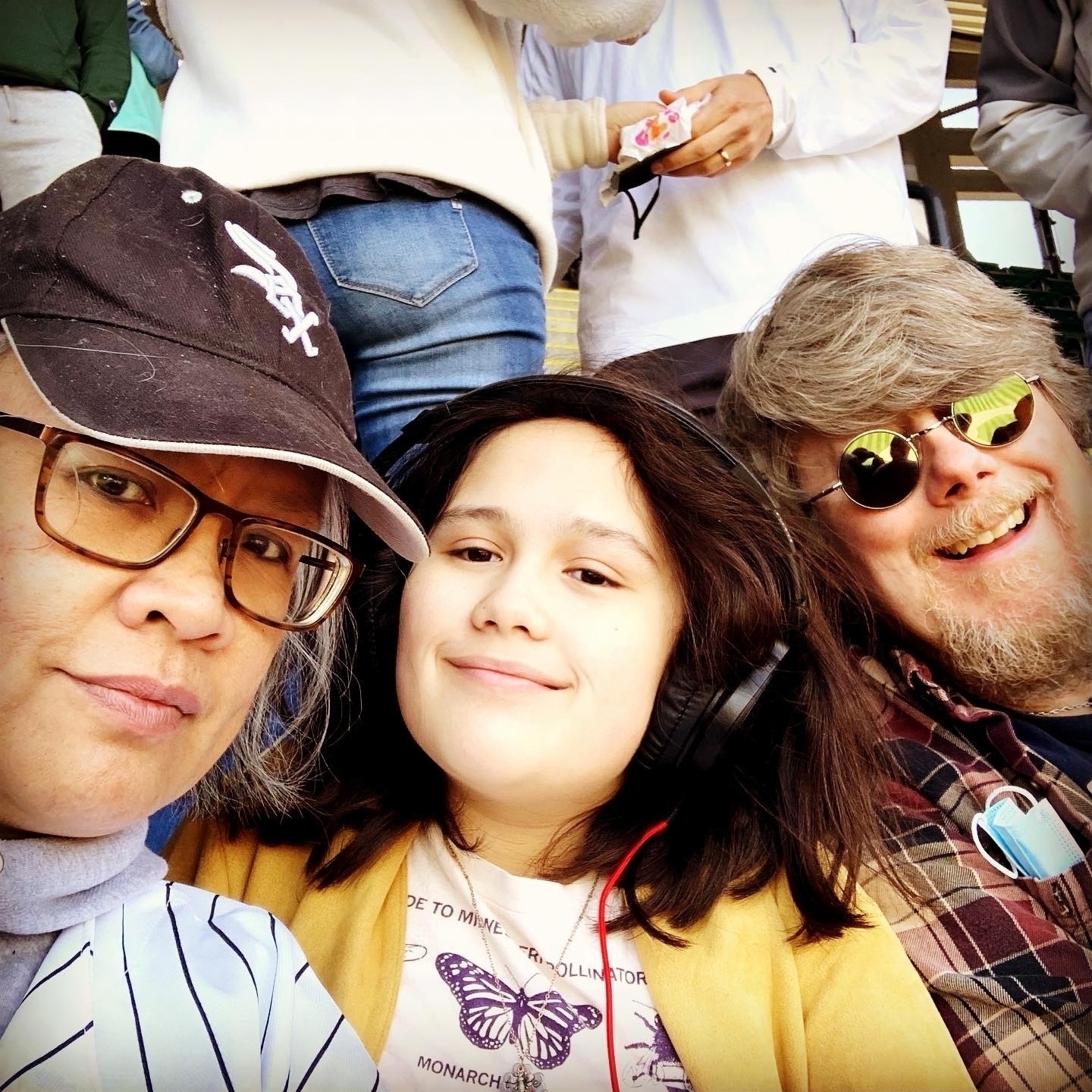 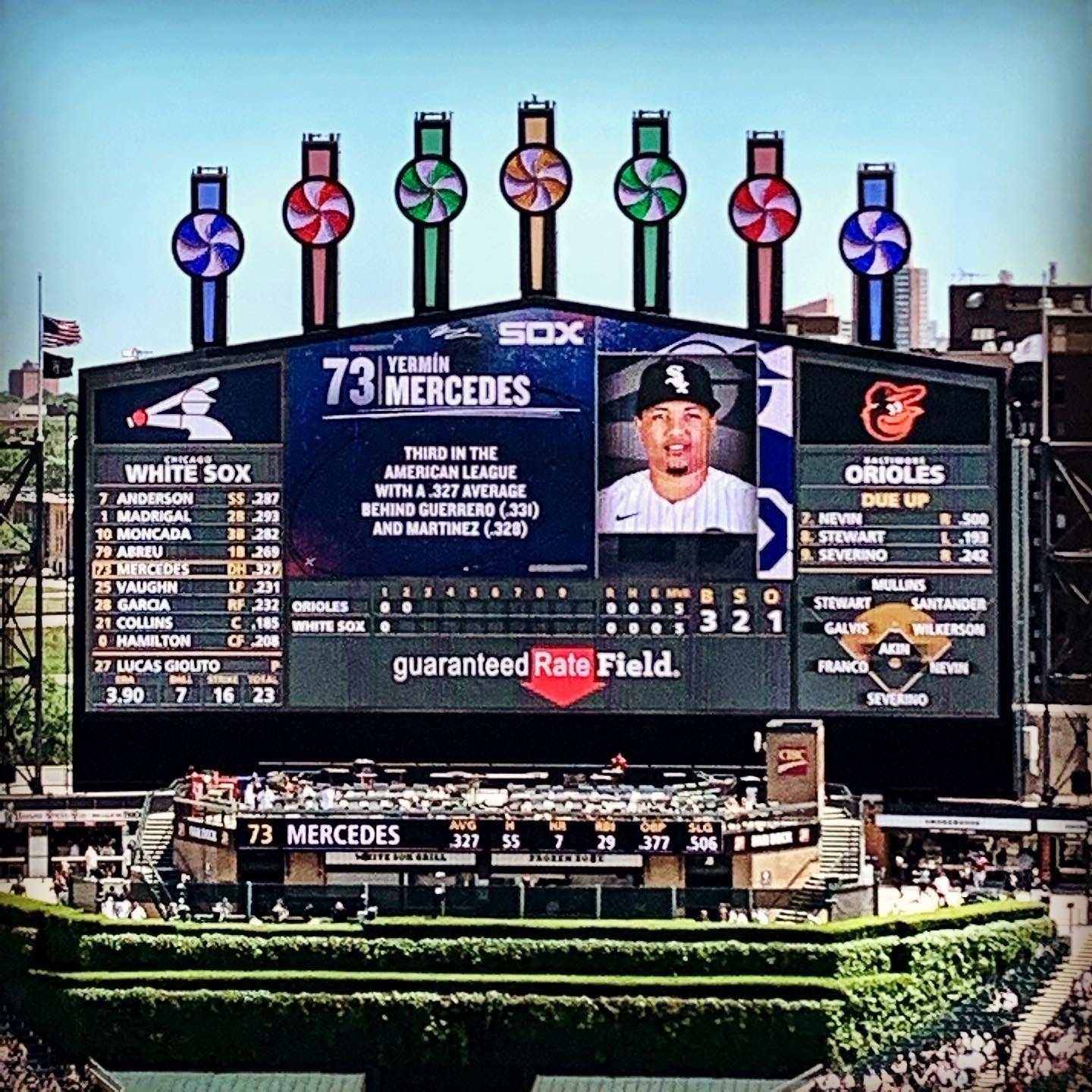 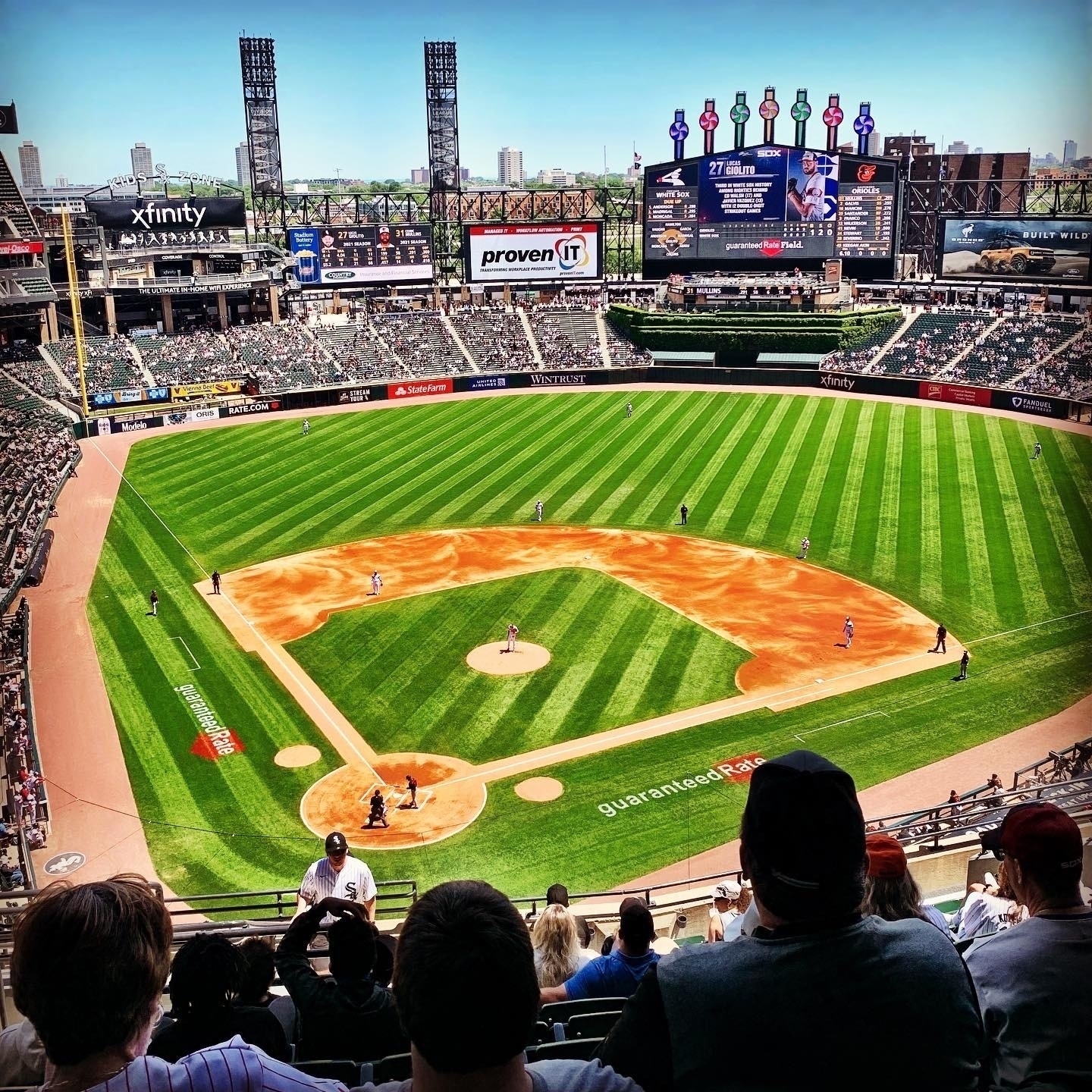 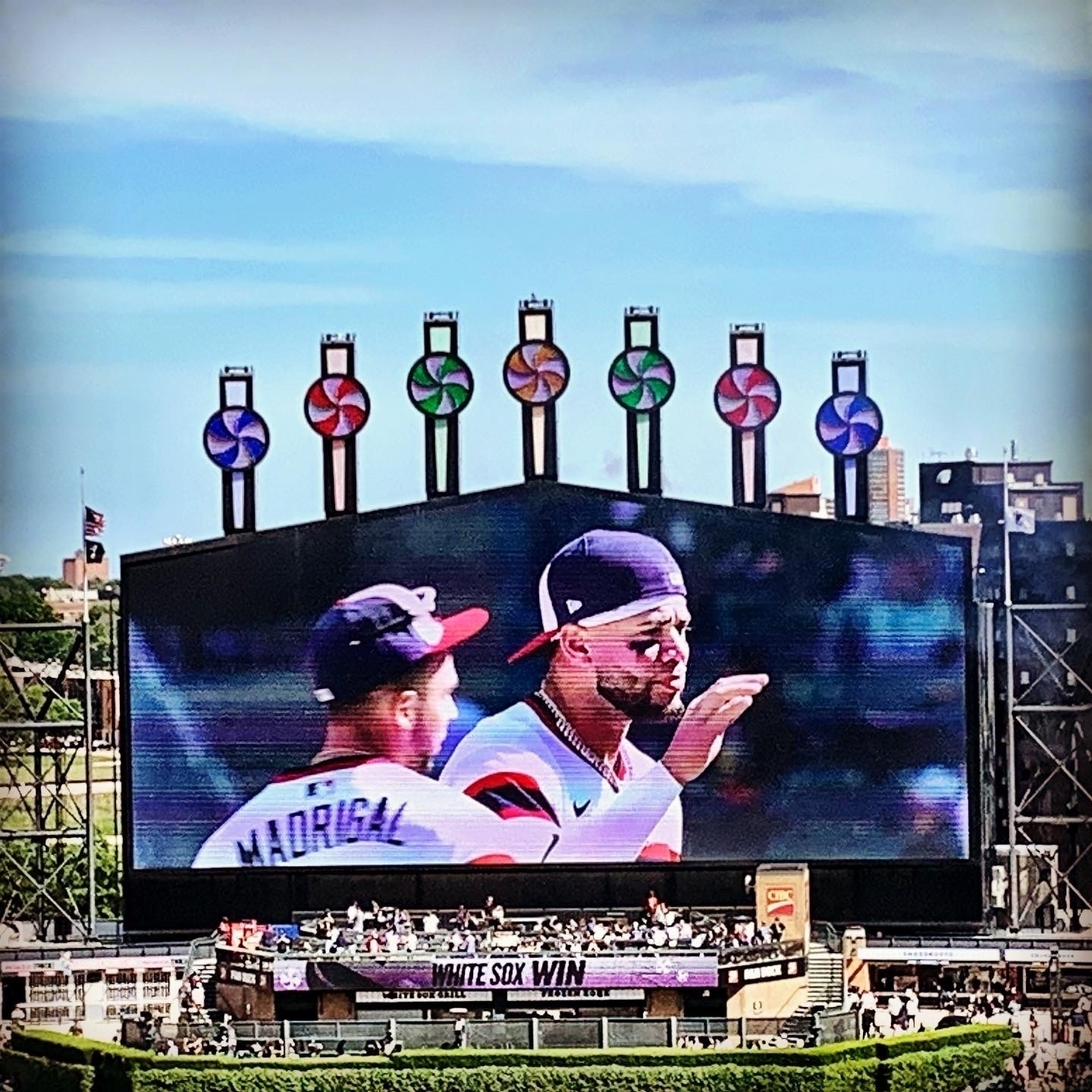 The guy had a mask on, but I could swear he was smiling. 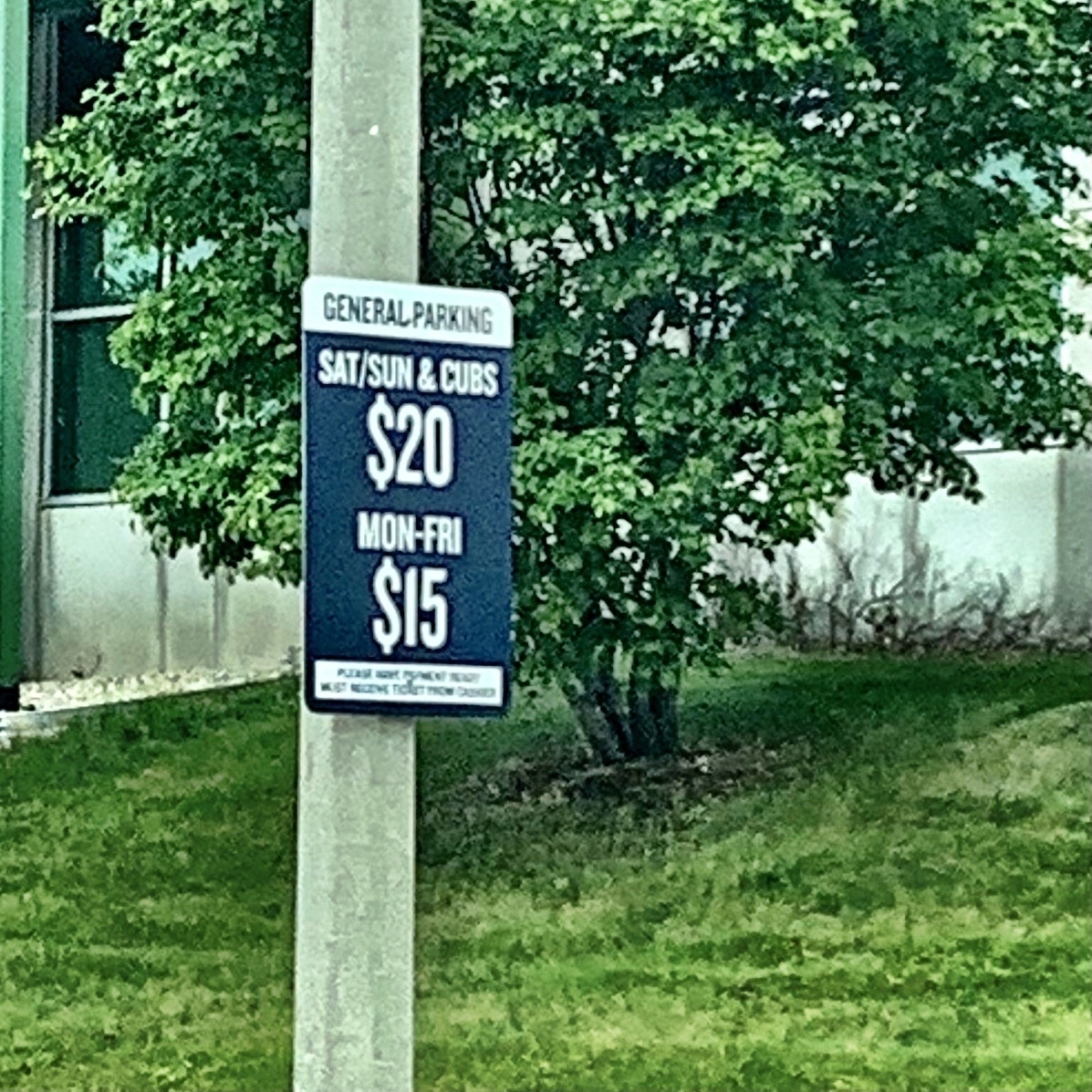 One of the first things my sister told me Tuesday after she broke the news of our mom’s passing: Go ahead and go to your ballgame on Thursday. It wasn’t exactly what I was thinking about at the time.

But she reiterated the point during another phone call that night. “Daddy would want you to go,” she said. “Mams would want you to go.” Even my boss – who signed off on my day off for the game weeks ago – said the next morning, unprompted, I needed to go.

Finally, one of my wisest friends wrote me in an email this morning: “Don’t be shy about enjoying life (like ice cream and baseball) as you also press into waves of grief.”

So, we’re in Milwaukee today to watch my Padres. Mom wasn’t much of a baseball fan, but I’m still thinking of her anyway. 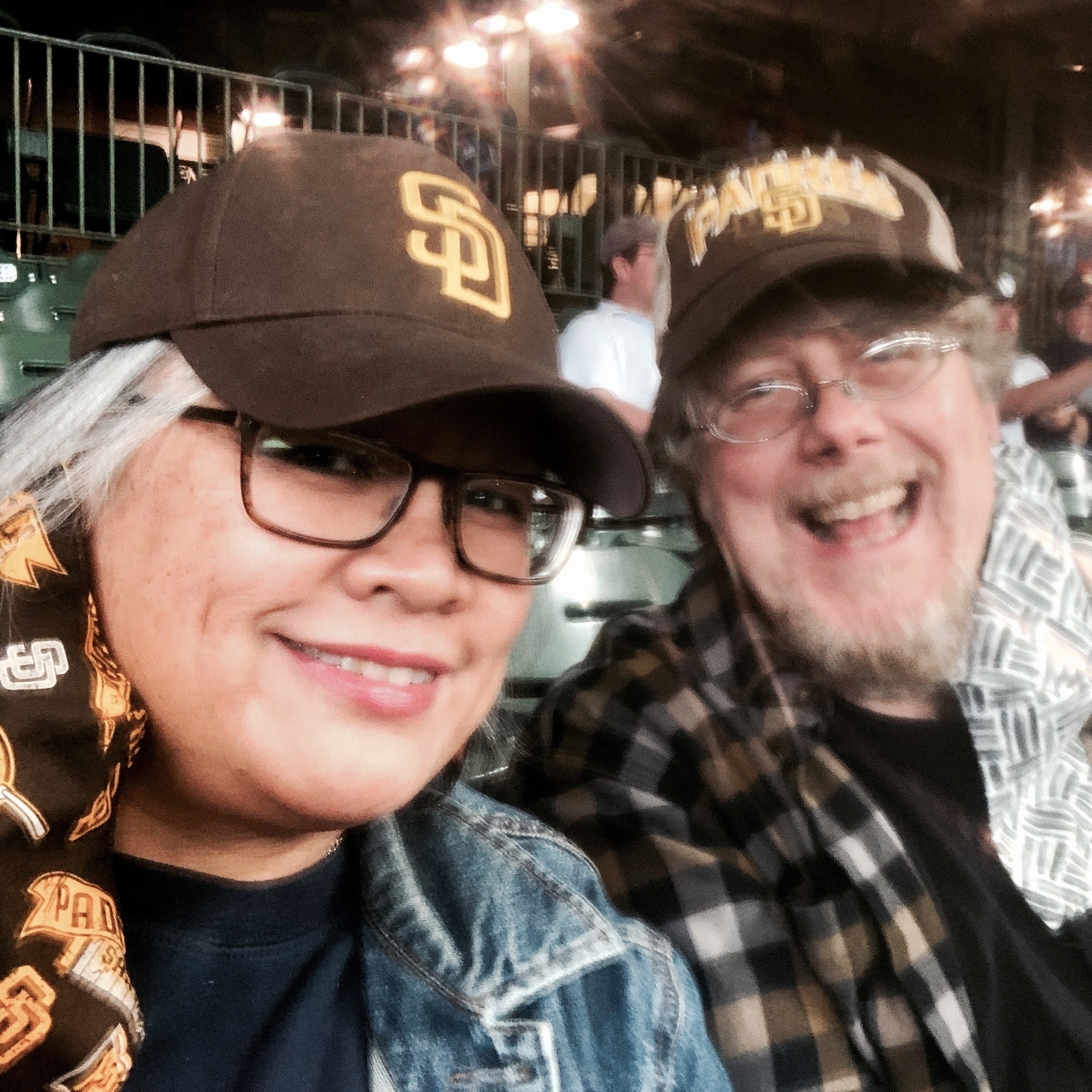 I’ve had a sad and rough 24+ hours, and I can’t sleep. But we’ve still got tickets to see the Padres in Milwaukee later today, and we’re going to use them. I need just a little bit of joy right now. Like this. https://t.co/jhJpZWQ7o7

Baseball creeps into so many corners of our lives. 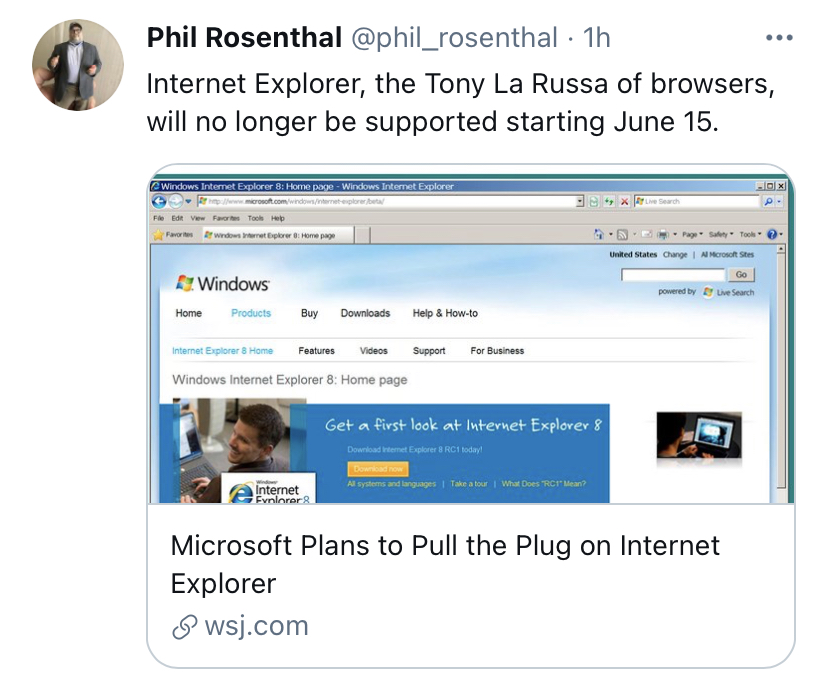 I watch baseball on my Kindle Fire, provided Winslow lets me. 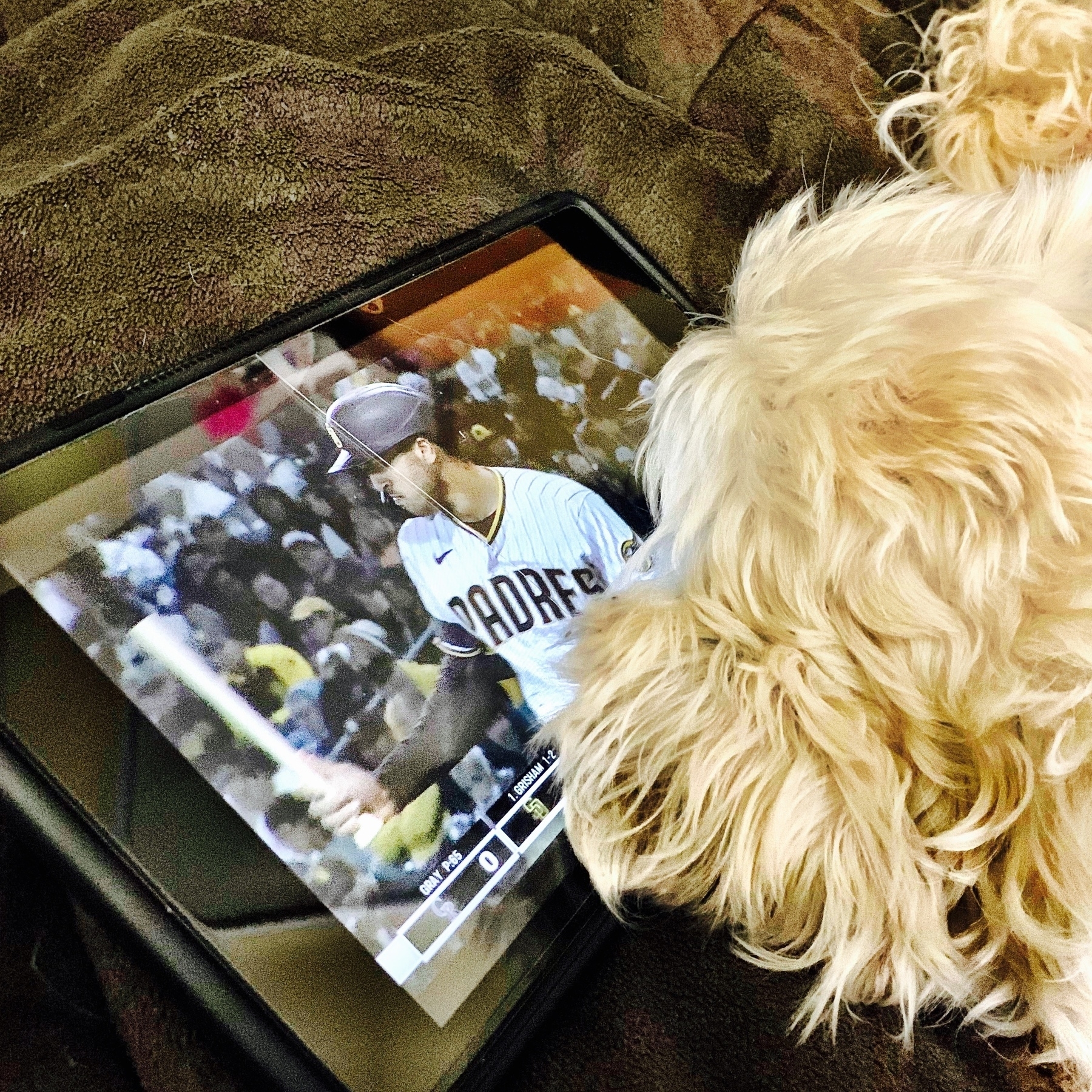 Anybody else find it slightly awkward that the White Sox, of all teams, has an “official betting partner”? #EightMenOut #BlackSox

Probably not what Red Barber had in mind when he talked about “sitting in the catbird seat.” 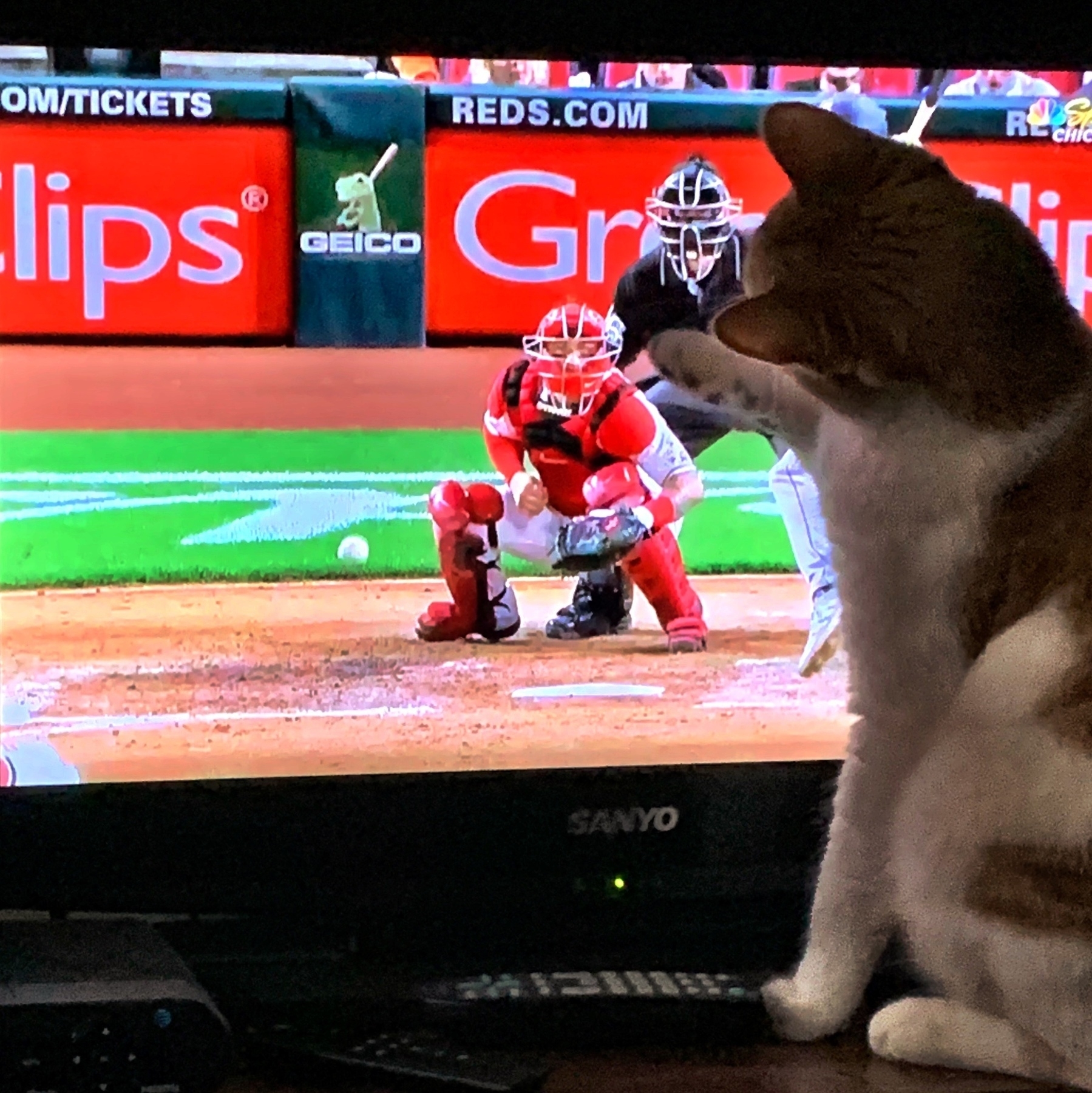 Following the White Sox and the Padres with equal intensity this season is going to kill me.

Was up until 2 a.m. with a couple of work projects, and now I’m starting the work week with a headache and in a sluggish daze. Probably a good thing that I left my Fitbit charging when I finally went to bed, so now it can’t nag me with a poor sleep score.

Thank God for morning White Sox baseball on Patriot Day in Boston. I need Jason Benetti and Steve Stone in the background to soothe my frazzled, weary nerves.

It’s 1:10 a.m. in suburban Chicago and I’m following an amazing game in my old hometown with @Mudcat55 and @DonOrsillo and this totally makes up for the White Sox game being snowed out. https://t.co/XiR3pf9fBw

The cat would like to know why Shane Bieber has given up such a lucrative pop music career to fling baseballs at people. 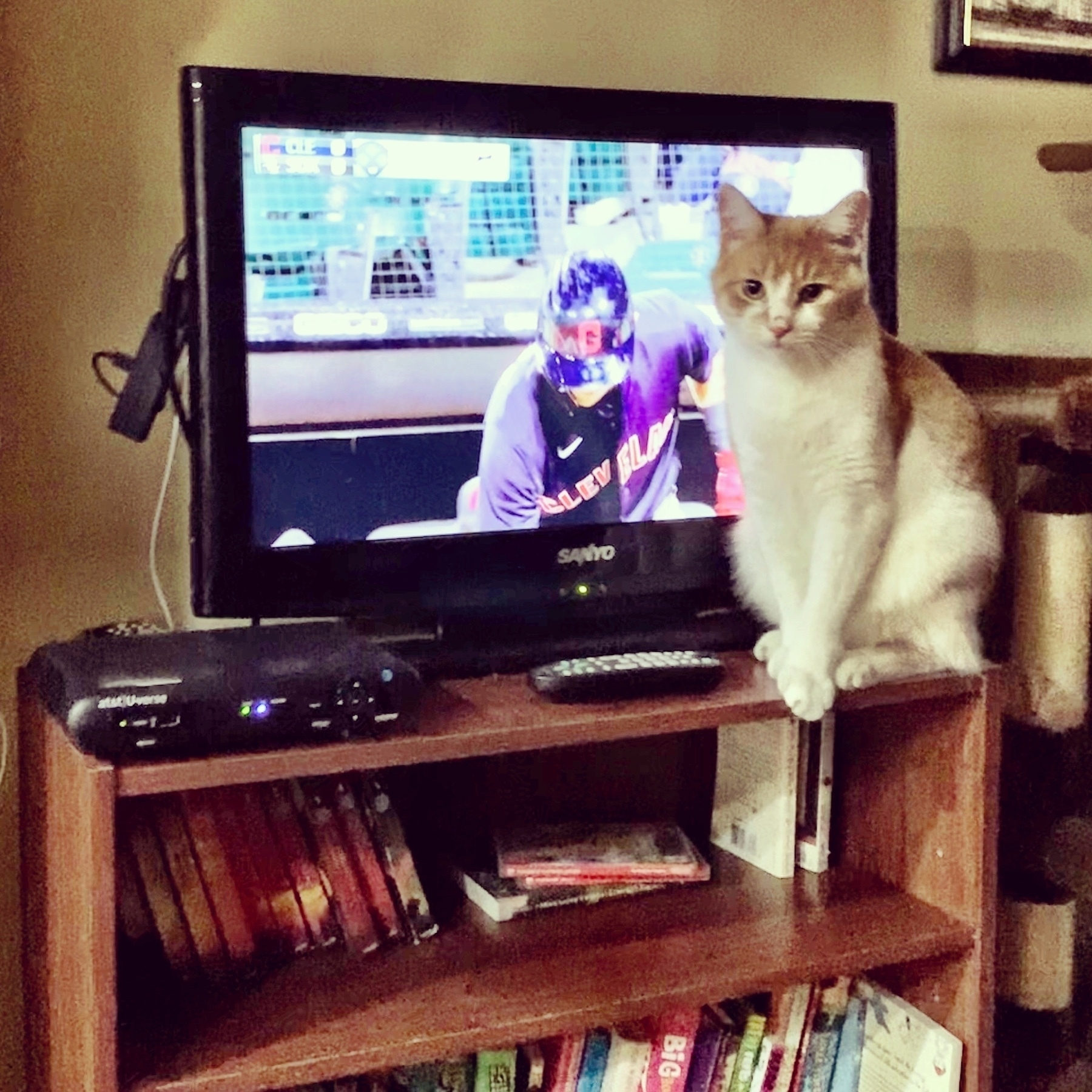 I can never decide how I feel about local sports references being inserted into the Sunday Mass from Holy Name Cathedral. But this time, I approve of the assisting priest’s White Sox mask. 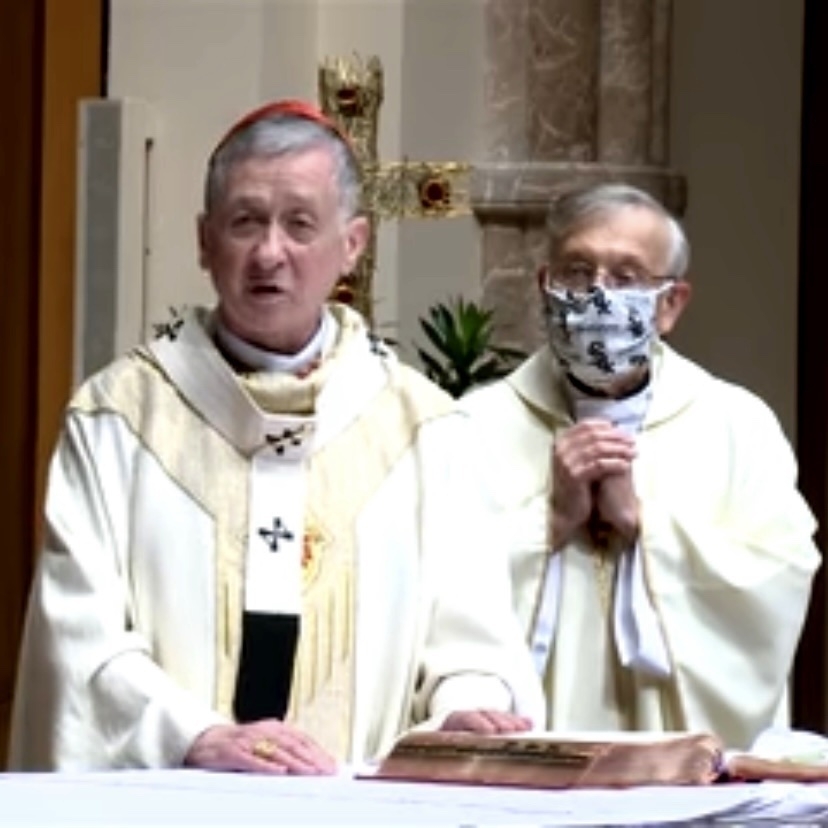 Deleted the pottymouthed post from a couple of days ago. There are more pleasant ways to announce that I started subscribing to MLB.tv streaming video in a fit of pique over a lousy day.